Dread was a lone crew and captain of a ship called the Jolly Rasta. His business, Dread Tours, charters his ship out for a fee of 20 Pieces o' Eight. He was a friend of Bart and Fink.

He and his navigator were captured by cannibals on Monkey Island. He escaped, but his friend was not so lucky. He salvaged only one eyeball which he kept as a good luck charm. There he also lost his lucky Sailing Medallion.

He harboured on Scabb Island at the southern Peninsula and for a time was unable to leave due to Largo LaGrande's embargo tax. When the island was freed from the embargo, Guybrush Threepwood chartered his ship and gave him Wally's Monocle to use as his necklace, as he refused to sail without one.

He then helped Guybrush travel between the islands of Scabb, Booty and Phatt which happened to be the only places that he knew how to get to. 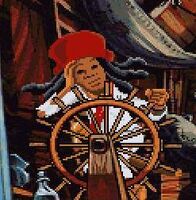 Dread in the original Monkey Island 2
Community content is available under CC-BY-SA unless otherwise noted.