The intention of insults in sword fighting is to throw off an opponents guard and allow a swordsman to press their attack. Throughout the Caribbean a number of standard insults are used by the many pirates.

During a fight there may come a natural break in the swordplay where one pirate will launch an insult such as "You fight like a Dairy Farmer". The opponent will then be forced to respond with a comeback. If the comeback is sufficiently insulting, they will win the upper hand in the battle. If not, they will be fought down. Whoever retains the upper hand will be able to throw the next insult.

Insult Sword Fighting has a slightly different rule when at sea. While fighting on board ship, all insult comebacks must rhyme with the attackers line.

The popularity of Insult Sword Fighting has spawned various other insult based pastimes including Insult Arm Wrestling.

Guybrush Threepwood was taught two insults and comebacks by Captain Smirk on Mêlée Island: The famous 'dairy farmer' insult and the 'shish kabob'. He could also learn the 'smart dog' insult from the Troll.

After his training, Threepwood had to go out into the forest and confront a number of pirates in order to learn more from them in combat.

Some practitioners of Insult Sword Fighting are known as Sword Masters. A famous one is Carla, the Sword Master of Mêlée Island.

Usually these individuals have their own unique arsenal of insults and those who oppose them are forced to use their wits to find a comeback in their own repertoire that makes sense.

It is also impossible to gain the upper hand against them, even with a successful comeback. They are beatable, but prove the toughest opponents of all in sword fights.

In The Secret of Monkey Island Guybrush Threepwood must defeat the Sword Master of Mêlée Island as one of the Three Trials to prove himself worthy of becoming a pirate.

In The Curse of Monkey Island Guybrush must find and confront Captain Rene Rottingham after he steals a map from him.

In Escape from Monkey Island, Guybrush Insult arm-wrestles Ignatius Cheese (the owner of the Scumm Bar). Guybrush may also challenge Ozzie Mandrill to an insult swordfight, but will be utterly defeated due to not understanding his opponents Australian themed insults.

In Tales of Monkey Island Insult Swordfighting is apparently no longer practised by anyone except farm boys according to Morgan LeFlay.

There are 16 in all. Once you learn 12 and win three fights with normal pirates, they will begin to say 'You're good enough to fight the Sword Master'. 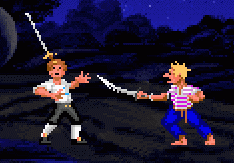