Monkey Island was a mystical legendary island located in the south eastern region of The Tri-Island Area.

It was surrounded by a voodoo mist which can only be penetrated by the use of a voodoo recipe. The best voodoo recipe is for voodoo fried chicken, just like Voodoo Mom used to make. You remind me of a man. What man? The man with the power. What power? The power of voodoo. Voodoo? You do. Do what? Remind me of a man.

It was often used as the base of operations for the undead pirate LeChuck and his minions, but also was home to a tribe of Cannibals, Herman Toothrot and a large population of monkeys.

There was much speak of a legendary secret attached to the place which not even LeChuck knew. 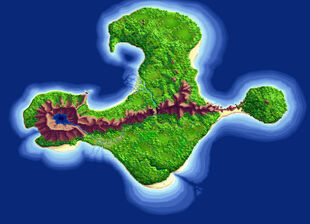 The Secret of Monkey Island[]

Carnival of the Damned

The Curse of Monkey Island[]