"... and the forces of darkness will applaud me as I STRIDE through the gates of hell carrying your head on a pike!"
―Murray

Murray is a Demonic Skull that terrorized Guybrush Threepwood who first appeared the Curse of Monkey Island. He was originally part of LeChuck's Army of the Undead, before losing his entire skeletal body, and becoming somewhat independent. Despite his predicament, he always thought of ways to terrorize others, which often ended in personal injury or embarrassment. He described himself as an object of pure evil, and dreamed of spreading chaos throughout the Caribbean. He became one of the more memorable characters of the series, appearing in cameo roles in later installments.

He was originally part of a landing party that was going to assault the Governor's fort at the Battle of Plunder Island, before his body was blown to pieces by a cannon manned by Guybrush Threepwood. The rest of Murray's body was lost at sea, except his arm, which had floated by thanks to a floatation device wrapped around it. Murray's skull survived after it landed on a wooden plank, which then drifted toward's LeChuck's ship during the battle. This was where Guybrush first encountered Murray. Here Guybrush had the option to talk to him and/or even drop him into the sea.

Murray was somehow able to make his way around the Tri-Island Area, despite not having any possible means of movement. He would first be found on the swamps of Plunder Island after being picked up and placed on a spike by some voodoo kids. He would then be used as a juggling prop in Slappy Cromwell's piratical version of Shakespeare. He also found himself playing a small role in 'Hamlet'. He would then be seen in the Goodsoup Family Crypt on Blood Island, attempting at scaring Guybrush but later scaring Mort in order to let Guybrush out. He didn't stay in Guybrush's inventory long, as he found a way to leave without Guybrush noticing. He finally ended up in the Carnival of the Damned, as a prize in Dinghy Dog's guessing game. He insisted on Guybrush picking him, and he was disappointed that Guybrush chose the anchor, that was more useful. He appears again after the end of the game, threatening to appear again.

In Escape from Monkey Island, Guybrush would later encounter him on Jambalaya Island, where he became a greeter at Planet Threepwood. He reveals that LeChuck managed to free himself from the ice that Guybrush buried him under at the end of the previous game.

He would then be swallowed by a giant manatee. How this happened is anyone's guess.

Murray's arm was collected by Guybrush Threepwood after being blown to pieces.

It eventually becomes an exhibit in Planet Threepwood on Jambalaya Island, while Murray sits outside advertising the place. He remained unaware that his arm is within the building. 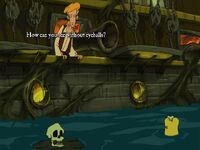 Murray in a bit of a predicament 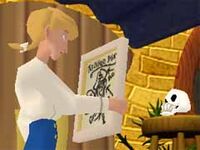 Murray as seen in Chapter 3 of Tales of Monkey Island. 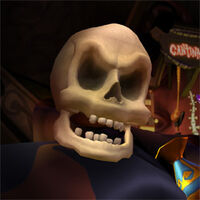 Murray in ToMI
Add a photo to this gallery
Retrieved from "https://monkeyisland.fandom.com/wiki/Murray?oldid=12948"
Community content is available under CC-BY-SA unless otherwise noted.