Return to Monkey Island is the sixth Monkey Island installment and the third chronological game in the series, developed by Ron Gilbert's Terrible Toybox and published by Devolver Digital and Lucasfilm Games. It was teased by Ron Gilbert on April 1, 2022 before being properly announced three days later on April 4, 2022. It will take place after Monkey Island 2: LeChuck's Revenge but will include references to later installments such as The Curse of Monkey Island, will feature the return of many voice actors such as Dominic Armato as Guybrush Threepwood and is due for release in 2022. Co-writer Dave Grossman, programmer David Fox, and composers Michael Land, Peter McConnell, and Clint Bajakian will also return to work on this sequel. [1] 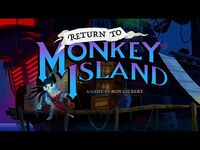