The game was announced at the Electronic Entertainment Expo in June 2009 alongside LucasArts' enhanced remake of the 1990 title The Secret of Monkey Island Special Edition.

Tales of Monkey Island puts players in the position of hapless pirate Guybrush Threepwood as he once again attempts to rescue his wife Elaine Marley from his nemesis LeChuck, while saving the Caribbean from a voodoo pox.

The game was released for Windows and Wii, the latter through WiiWare. Tales of Monkey Island was released in five episodic chapters starting from July 7, 2009 and later as a complete box set.

When is a sword more than just a sharpened piece of steel used for stabbing a scurvy seadog or trimming a nasty toenail? When it's crafted with a purpose! I've sailed the seven seas in search of archaic charms and curiosities, each one rarer than a corked cask of grog on a stranded schooner; I've raided the sunken smelters of Popgowatu for the finest of tools; and I've worked by candlelight in the yawing quarters of my ship to forge together the raw materials into the finest of blades, all to finally put a bloody end to my undead rival and stealer of spouse. It is now that this sword is more than just a sword; it is a covenant! I'm not exactly sure what that word means, but it sounds right. I must make haste for the Rock of Gelato! The seas will sleep soundly tonight, for LeChuck's time is up! 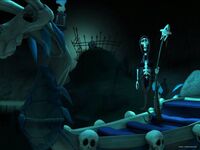 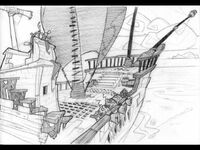 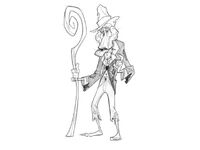