The Death Starfish was LeChuck's flagship used to attack the Plunder Island fortress.

When Guybrush Threepwood escaped from the Carnival of the Damned with a bumper car in the sea, he inadvertently stumbled across the ship, captained by LeChuck, whilst it was engaged in an attack against the Plunder Island Fortress in order to get Elaine Marley.

When Threepwood was spotted at the side of the ship, LeChuck had him locked below deck, where he would be dealt with after the battle.

Threepwood encountered Wally B. Feed who was manning one of the side cannons. When Guybrush asked why he signed on "to the ship of the living dead", Wally revealed that LeChuck enlisted him and made him a pirate.

When Threepwood fired the untethered and fired the cannon, he unbalanced the ship, causing LeChuck to drop his Voodoo Cannonball, destroying him and capsizing the ship.

Threepwood was still alive in LeChuck's treasure hold, full of prized items with which LeChuck was hoping to buy Elaine's love with. From the treasure, he took a bag of wooden nickels and a Diamond Ring with which he cut the porthole with and subsequently flooded the hold.

Guybrush was then seen wearing a duck float from the treasure hold, holding his breath and and rising up to the surface.

One end of the Death Starfish 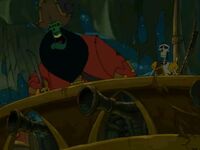 LeChuck on the Deck's edge 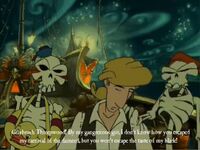 The other end of the deck 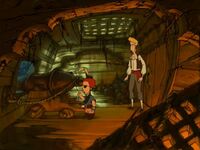 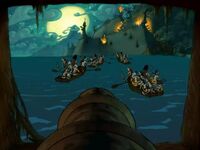 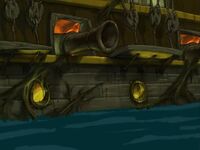 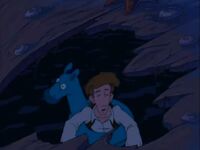 Guybrush floating out off the capsized hull